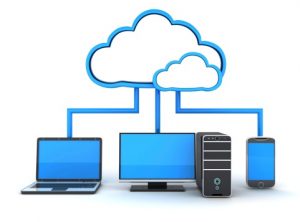 The cloud has been around and functional for quite some time! How could your company benefit from using it?

A lot of people consider cloud storage to be a newfangled technology, simply because they haven’t heard of it until very recently.  The internet has been around for a few decades, though.  And it’s not as though computers are brand new pieces of technology.  Actually, the concept of a comprehensive storage network has been around since the sixties!  Read on for a brief rundown regarding the history of the cloud.

The idea of an “intergalactic computer network” was introduced by J.C.R. Licklider in 1969.  He had a vision–one of a global connection that provided all people with an internet connection access to an overarching storage system.  What seems normal to us now was revolutionary at the time of his idea.  Of course, the internet for the public masses has only been useful for a little over twenty years.  That’s why you’ve only heard about cloud computing until recently–the internet wasn’t ready for such advanced coding.

There were several companies that were the first to start working with cloud services.  One, in 1999, was Salesforce.com.  They provided the ability for companies to access different applications over the internet.  Next, Amazon released the Elastic Compute cloud (EC2) in 2006.  This was essentially the same concept, but allowed people to rent computers.  Google, in 2009, released their application system you know today (Google Docs, Google Sheets, etc.).  So, the cloud has been around and functional for quite some time!  How could your company benefit from using it?

SOS Technology Group is a full-service IT consulting company focused on delivering IT Services and Solutions to businesses across the USA. We offer a range of IT Consulting and IT Outsourcing services including Network Management, Dedicated Servers and Managed Services, customized to meet your unique business needs, so you can stop worrying about technology and focus on your business.  Give us a call at 410-559-7020 or contact us here to get started. You can also follow us onFacebook,Twitter,LinkedIn,Pinterest, and YouTube.